Grainger & Grainger [2019] FamCAFC 145 – where the father appealed orders of the trial judge which provided no face-to-face contact with the child on the grounds of procedural fairness and alleged errors of law – father alleged orders were based on inconsistent findings and not supported by evidence – the Full Court accepts the trial judge’s findings closely resembled the expert’s evidence and were open – Appeal dismissed – the trial judge invoked the slip rule to make clear that an order made by a judge in 2017 did not operate to suspend the property settlement order made in 2015 – Where the father’s appeal is limited to his complaint that the trial judge corrected an order made by another judge – Appeal dismissed.

Cloakes & Heinz & Anor [2019] FCCA 11 – risk of harm considerations arising out of violence and drug use – whether child should live with mother in Brisbane – Orders made in best interests of child.

Grainger & Grainger [2019] FamCA 56 – second trial – Where final parenting orders were made in 2015 for the child to live with the mother and spend supervised time with the father with provision for the father to apply to vary the time with orders.

Harradine & Hermesly-Lane [2018] FamCA 260 – application under s79A of the Family Law Act 1975 – whether miscarriage of justice – whether “any other circumstance” – whether implied consent to a variation of orders made 12 years ago – whether orders should be set aside – application dismissed with the applicant to pay the respondent’s costs.

Sielaff & Staatz [2018] FamCAFC 213 – where the parties agree that the appeal be allowed, that the orders appealed be set aside, that the matter be remitted for rehearing and costs certificates issue pursuant to ss 9, 6 and 8 of the Federal Proceedings (Costs) Act 1981 (Cth).

Monroe & Applegate [2018] FamCA 227 – where the biological mother and step-father seek leave to commence adoption proceedings in the Supreme Court of their state – leave is granted.

Finau & Finau [2018] FamCA 49 – where the wife seeks that the parties’ investment property be sold and a portion of the proceeds of sale be paid to her in litigation funding.

Ploughman & Ploughman [2017] FamCA 612 – where the Court must balance the importance of the children having a meaningful relationship with their mother with the risk posed by the mother’s potential relapse into alcohol abuse – where an application for an adjustment of property interests is made – Orders made for the sale of the former matrimonial home and for each party to retain 50 per cent of the interests held by their self-managed superannuation fund.

Chen v State of New South Wales [2016] NSWCA 177 – appeal to the NSW Court of Appeal – separate plaintiffs in single proceeding seeking to appeal – appeal to be heard concurrently with application for leave to appeal.

Proctor & Proctor [2016] FamCAFC 129 – application for an extension of time in which to file a Notice of Appeal – Application for expedition – where the orders being appealed resulted in significant changes to the child’s living arrangements.

Sauveterre & Warwick [2015] FamCA 1076 – where the wife seeks an order for interim spousal maintenance – extent to which the wife is unable to support herself.

Trevor & Trevor [2014] FamCA 1140 – where the mother seeks the father spend supervised time only with the children – where the father has mental health issues.

Needham & Jamieson & Anor [2015] FCCA 2298 – parenting orders where there are allegations of family violence and alienation.

Chen v Cui [2015] NSWSC 1480 – appeal to Supreme Court of NSW – whether Magistrate erred by failing to consider alternative claims to set off debt which were not disclosed in submissions – whether a separate agreement allowed for debts to be set off – whether money paid was at the request of respondent.

Barone & Barone [2013] FamCA 227 – where the father filed an Application in a Case to vary the children’s school.

Barone & Barone (Costs) [2012] FamCAFC 144 – whether the appellant father should be ordered to pay the respondent mother’s costs of two previous appeals instituted on his behalf and subsequently withdrawn.

Chang & Malleson [2012] FamCA 622 – where a party is in breach of financial Orders – whether the party in breach should be heard on an application for further Orders.

Quick v Alpine Nurseries Sales Pty Ltd [2010] NSWSC 1248 – whether substantial and unreasonable interference by the defendants with the rights of or in connection with the plaintiffs’ use of their land as a result of development and use of defendants’ land as commercial nursery.

Shand & Connor [2010] FamCA 59 – orders for the parents to have equal shared parental responsibility for the child.

Chao v Chao [2008] NSWSC 584 – admissibility of evidence – where evidence being adduced is a transcript of a recorded telephone conversation.

Chao v Chao (No 2) [2008] NSWSC 612 – application to reopen case after judgment reserved – whether evidence sought to be adduced relevant only to a collateral issue.

Chao v Chao (No 3) [2008] NSWSC 1166 – whether there was a common intention that the house was to be purchased on trust for the plaintiff – whether presumption of resulting trust resulted.

Boniadian v Boniadian [2004] NSWSC 499 – applications by a daughter and a widow under Family Provision Act 1982 – widow successful in family provision claim – daughter’s blackmail of her mother was conduct disentitling in respect of the deceased.

Date of Admission as a Solicitor: 25 September 1992

Practice as a Solicitor: 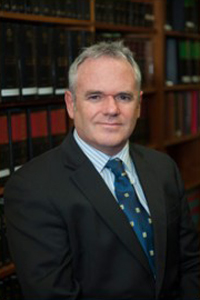